My Story: Suffragette, an Edwardian Girl’s Diary 1909-1913 by Carol Drinkwater 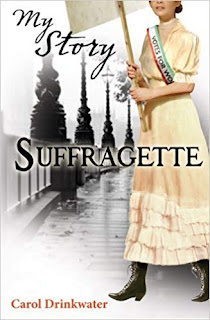 Dollie tells her own story through her diary.  She is a young girl who used to live in the slums.  She is given a chance in life and adopted by a rich family who make their money from the docks.  She becomes involved with Women’s Suffrage and Political Union.

The text makes the difference between suffragettes and suffragists quite clear. We read some gruesome details of how women were imprisoned and what happened when they went on hunger strike.

Dollie herself is imprisoned and is force-fed.  She is also present at the Derby at the Epsom race course on the 4 June 1913 where Emily Wilding Davison throws herself down in front of the king’s horse. Emily died of her injuries on 9 June 2013.

At the end of the book is a useful timeline and there are also some intriguing photos. The author provides some historical notes.

This is one of a series of “My Story” books where history is brought to us through the voices of young poeple.
Posted by Gill James at 09:06